Tonight the hubs and I hosted dinner and a movie for his parents. I made french dip sandwiches, mashed potatoes and corn on the cob.

His mother brought tons of movie goodies and we watched Harry Potter and the Deathly Hallows Part 1.

I could not be more excited to go see HP7 part 2 tomorrow. Seriously, I kind of feel giddy. And nauseous. I don’t want it to be over!

Anyway, I decided to make french dip sandwiches for dinner tonight because they were the first recipe I tried on this blog! See?

I think I made them a lot better this time, and my picture taking abilities have definitely increased. That first picture was taken on my cell phone!

Also, I forgot to take a picture so ignore the third of the sandwich that is missing. Okay, thanks.

Here is a picture of all the goodies we had to snack on… most of it is leftover but that’s okay by us! 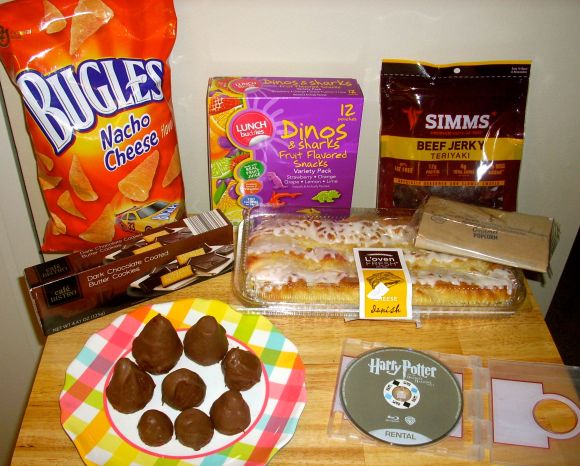